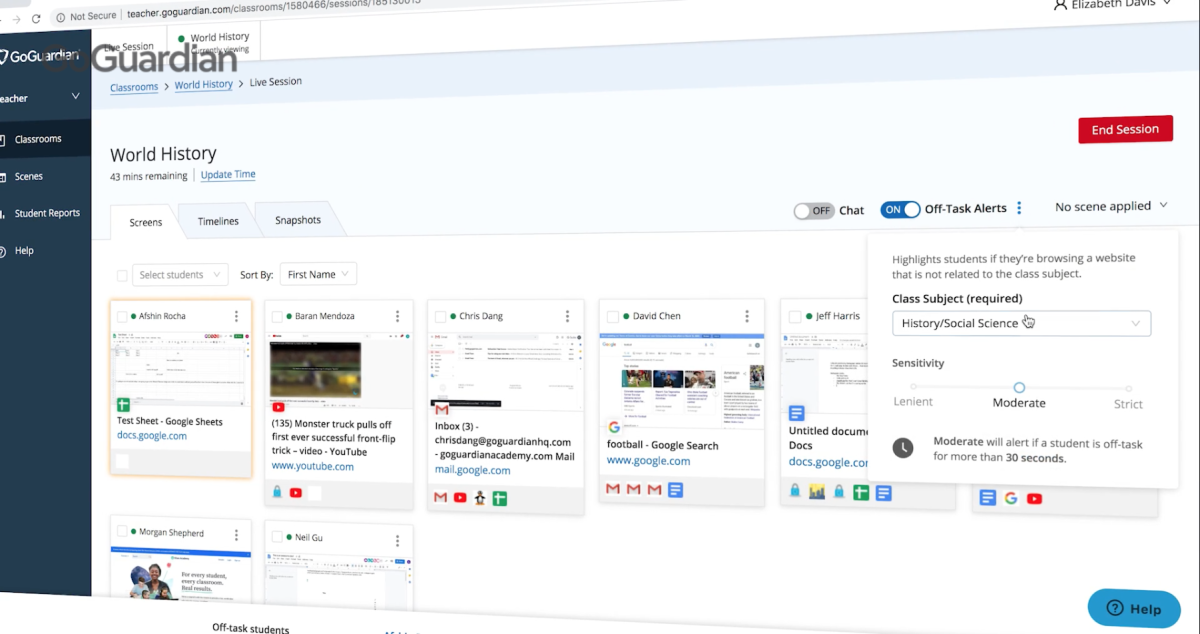 The concept of students staying on-task is commonly mentioned among educators and service providers, but what does it mean to be on-task...and conversely, what makes them off-task? When students stray from the classroom assignment or lose focus on the instructed activity, they are considered off-task. Some off-task behavior in the classroom may be easy to spot, but a majority of off-task behavior actually takes place on productive websites like Google Search and Google Docs. Because it isn’t always easy to see, teachers spend a lot of time trying to determine when students are off-task.

GoGuardian Teacher™ has released a new feature called Off-Task Alerts. This feature is unique in the classroom management space because it uses artificial intelligence to automatically detect when a student goes off-task and visually alert the teacher. The alerts are generated based on four classroom subjects: English, History, Math, and Science. This means that even when students are chatting in Google Docs or working on homework for another class, Off-Task Alerts will identify that the student is off-task.

With Off-Task Alerts, teachers can spend less time monitoring students for off-task behavior, and more time focused on teaching and engaging with their students.

And so far, teachers seem to love it! Within 24 hours of releasing Off-Task Alerts earlier this year, over 20,000 teachers were using the new feature.

"Off-Task Alerts is like having an assistant to help make sure my students stay on-task. I love that I don't have to stay glued to my GoGuardian to know whether a student is off-task."  ~Shannon Harding, Technology Integration Specialist at Moline-Coal Valley School District

How does it work?

“Off-task alerts are great! …I showed some teachers how to use the Off-Task Alerts feature by pretending to be a student on a Google Doc. It appeared to them that I was working in that assignment, but in fact, I was talking about video games. Shortly after, GoGuardian Teacher identified me as off-task. We investigated further by opening the student tile and found that I was indeed off-task from the subject."
~Shannon Harding, Technology Integration Specialist at Moline-Coal Valley School District

How does it know when a student is off-task?

To build this feature, we needed a LOT of data about what content teachers consider to be off-task. When our GoGuardian teachers clicked on a student’s screen in the app, we asked, “Is this student on-task?” Teachers who had already selected a subject and answered “yes” or “no” provided a data point that helped to build a machine learning model. After receiving thousands of data points for the most common four subjects, we used the data to inform and build machine learning models that could read the content on a student’s page and determine whether it reflected that specific school subject.

If the page content does not match the subject listed in the class, the page is considered off-task and a yellow border will appear around the student’s tile. We have four machine learning models, one for each subject: English, History, Math, and Science.

“Off-Task Alerts helps me quickly monitor student device usage at a glance without having to spend too much time focusing on individual student activity," said Joey Minnich, an English Language Arts Teacher at Waynsboro Area Middle School. He even noted that it could identify when students were using productive tools, but in an off-task manner: "For example, a student might be in the pdf tool Kami, but they are using the tools to draw instead of complete the task."

What did the models find?

Building the models provided some valuable insights into which websites score highest on the ‘off-task scale’ and which off-task domains were most frequently visited.

First, here are the websites that had the highest ‘off-task scores.’ As you can see, websites like ESPN and YouTube scored as some of the most off-task content.

Websites with the highest 'off-task scores':

We also were able to capture data on how on- or off-task students were during a classroom session.

Why did we build this?

Teachers spend a lot of time trying to determine when students are off-task. Some off-task behavior may be easy to spot, but because a majority of off-task behavior actually takes place on productive sites, teachers often have to click on the student and investigate. And with the amount of time teachers spend investigating, they can feel tied to their desks and unable to interact with students as much as they’d like.

We want to help teachers spend less time investigating off-task behavior by identifying and surfacing that information to teachers. And because teachers don’t want to be stuck at their desks, we created the visual alert for off-task behavior that can easily be seen from across the room. This way, teachers can spend less time managing and more time teaching and engaging with students.

“Off-Task Alerts allowed me to be more present in my physical classroom space…It changes the way that I’m running my classroom...Some teachers have a big hesitation to computers because they don’t know how to manage it or how it will fit into their lesson. But GoGuardian and Off-Task Alerts can get back that feeling of being present.” ~Middle School Science Teacher

What else should we know?

A teacher can also make adjustments to the sensitivity of the alerts and override alerts for specific websites.

Teachers may want to use a more lenient setting if they allow students to listen to music via YouTube or Spotify during class. When turned on, the Off-Task Alerts feature defaults to the Moderate setting.

If teachers make certain exceptions in class or if Off-Task Alerts has incorrectly identified a website as on- or off-task, teachers can override this at any time. Click on the student’s tile to expand the screen, and make a selection from the drop-down menu next to the message, “Should a student’s screen be highlighted when they browse this website?” Teachers can even make these adjustments after a class session has ended by viewing session history in Timeline view.

Visit our Distance Learning hub for resources to support your schools during closures.

a month ago2 min read
News

GoGuardian and Edulastic are teaming up to transform digital learning

Edulastic is joining GoGuardian! We want to share what this acquisition means for our teams and for educators everywhere.

Keep Your Students Safe with the Latest Updates in GoGuardian Beacon

See the latest product updates to GoGuardian Teacher, as well as what's in the works for summer and fall releases.

Sign up to receive emails with the latest from GoGuardian, including product releases, special offers, and events.